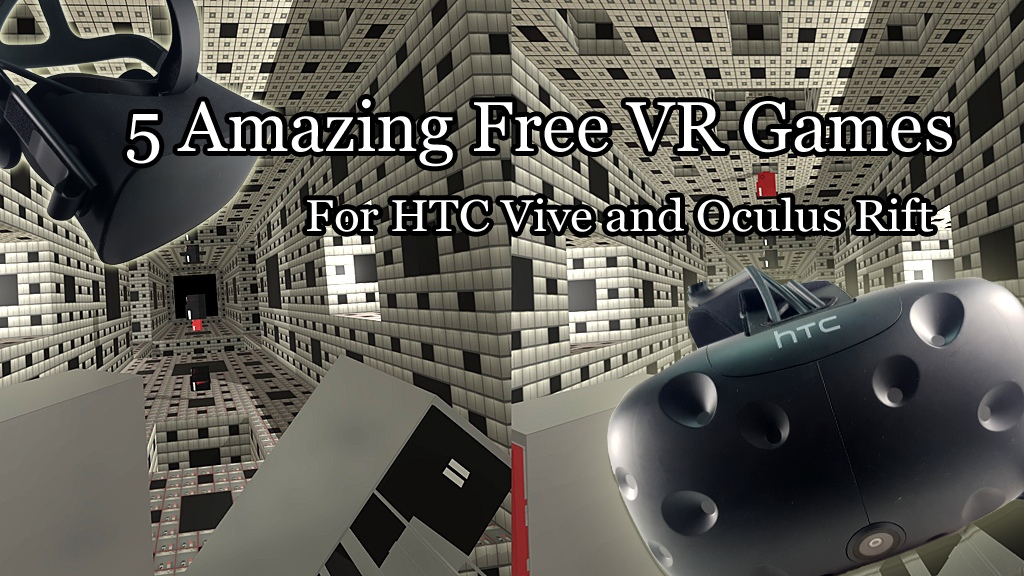 We’re now officially living in the age of virtual reality. But let’s not get confused here. There are certainly different and varying levels of quality when it comes to VR. In other words, all virtual reality is not created the same! Sure, the Google Cardboard and the Samsung Gear VR are pretty cool and affordable but if you want to see what true and immersive VR really feels like, it is imperative that you demo either the HTC Vive or the Oculus Rift!

If you’re one of the lucky few who can afford the HTC VIVE or Oculus Rift, it’s good to know that there are a plethora of exciting, trippy and totally amazing VR apps, games, movies and experiences to be had…and they’re totally free.

I browsed through Steam VR and hand picked five virtual reality games and experiences that don’t cost a penny and will all treat you to a mind-blowing and extremely entertaining VR experience. The following five free VR games vary from absurd to highly entertaining and some are even shockingly disquieting. This list is meant to tickle and trigger as much of your senses as possible otherwise, what good is virtual reality if you don’t feel like you’re completely immersed in another reality?

From the twisted minds of popular T.V animated show, “Rick and Morty” comes a virtual reality game that is deliriously absurd if not altogether outright insane. Accounting uses an “Inception” VR plot in that you keep delving into deeper virtual reality levels. You start off in an accounting office and are directed by an intercom (voiced hilariously by Justin Roiland) to do a series of activities to sink into the next level. There’s no real game mechanics to Accounting, it’s basically a wacky walkthrough set in ludicrous worlds and zany characters. The best part about Accounting is that it’s completely free and while it’s not a long game by any stretch, it’s still a testament to how trippy VR can be when put into unhinged hands. Try it out.

Accounting is a complimentary free VR game by Crows Crows Crows in conjunction with Squanchtendo. You can download it from Steam.

Ever wanted to fly around like Iron Man? Well, now you can with the HVR Demo. This game’s main appeal is the use of the controller wands which you can use to fly around in interesting and immersive ways. Just use your instincts to direct your flight path just like Iron man would with his propulsion hands. In game developer, Andre Le’s HVR Demo, you’re outfitted with a spacesuit that you use to navigate around open space levels and shoot down enemy ships before they blast you out of the sky. This is the closest thing (so far) that virtual reality comes to making you feel like you’re a bona fide superhero. There are loads of free demos from developers and HVR, while just a demo, is worth checking out!

Suit up in your armored suit and download the HVR Demo here.

To entice customers to keep playing with high-concept virtual reality, developers have released a slew of free content. Nvidia VR Mini Games needs to be mentioned as a must-download for users looking to recreate a fun carnival experience. There’s a virtual reality shooting gallery that’s ultra fun as well as Whack-a-Mole, basketball, skeet shooting and even fire archery. The graphics are decent but the immersive gameplay is where it’s really at with subtle haptic controller feedback making you feel like you’re actually reeling back an arrow and whacking moles. Once again, Nvidia VR Mini Games is absolutely free and it’s a guaranteed fun time to play by yourself or with friends on your HTC Vive or Oculus Rift. There’s tons of mini-games to experience, so save your money on raffle tickets and bring amusing carnival-style games right into your living room.

Nvidia VR Funhouse was developed by Lightspeed Studios and can be downloaded here.

If David Lynch was a virtual reality game developer, he would’ve created something like “The Cubicle.” Everyone who’s ever worked in a cubicle has experienced that nihilistic dread of working in a cubicle. You start off with the mundane activity of putting files away in a filing cabinet but things quickly go sideways in a nightmarish way when your surroundings suddenly shift and collapse like you’re in one of those illusion paintings where dimensions seem never-ending and you realize the game is manifesting your sense of existential dread in maddening ways. I won’t spoil what happens but there’s never been a better example of how mind-bending virtual reality can be once the kid gloves are off! “The Cubicle” is free and it’s ten minutes of disturbing, immersive and impactful stimuli that will make you question your existence.

The Cubicle was a collaborative effort between developers, Roel van Beek, Jurgen Hoogeboom and Jesper van den Ende. You can download it from Steam.

Hands down, Quanero is insanely immersive and obscenely fun to play. You’re a time detective inhabiting a futuristic alien world and you have the slick ability to rewind, slow down and even stop time as you see fit. Your mission is to investigate a crime scene for subtle clues by observing everything from people’s conversations, items and causal actions for clues. Quanero is one of the most interesting and amazing experiences you will ever play because the premise is so revolutionary and works extremely well with virtual reality. In a time when free VR demos are so plentiful, it may be hard to find a couple free games that you actually like playing. Quanero is one of those games. It’s instantly and endlessly fascinating.

Quanero was developed by Laserboys3000. Experience what it is to be a time detective by downloading this Free to Play VR game here.

Check back for news and reviews of other great VR games for the HTC VIVE and other leading virtual reality platforms.