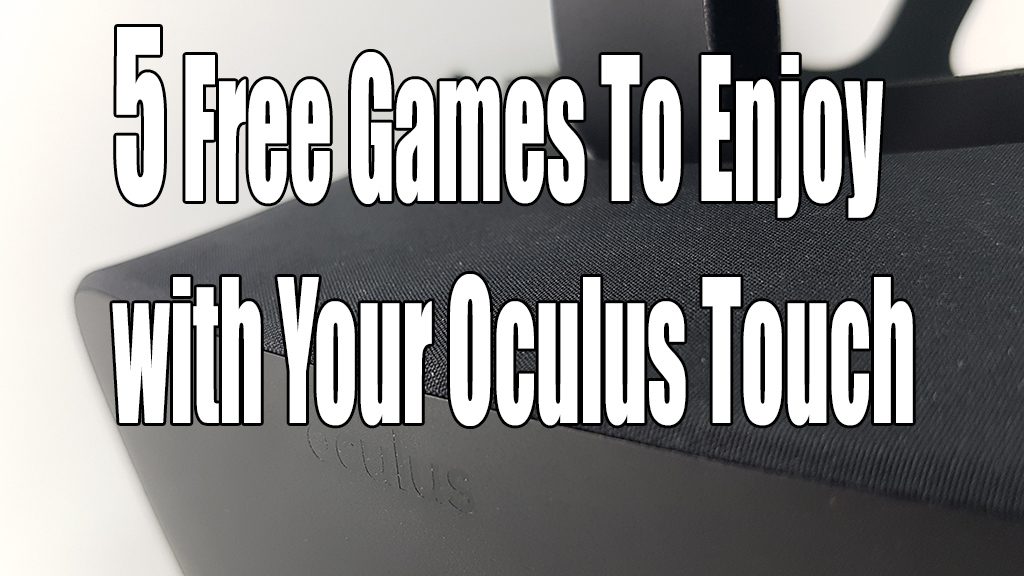 After ceding nine months to HTC Vive in the battle of VR controllers, Oculus Rift has finally released their highly anticipated Oculus Touch controllers and they are amazing, ultra-intuitive technological achievements. Here’s a list of of free Oculus games that you can download right now to get your Oculus Touch experience off the ground. From hyperkinetic action shooters like Bullet Train to artistic showcases like Quill, this article will demonstrate what the Oculus Touch controllers can really do.

If you haven’t had a chance to demo the Oculus Touch controllers or get your hands on this slick cool design you’re missing out. The button layout and overall shape works really well.

The Oculus Touch controllers are also much smaller in size than their VIVE equivalents.

Bullet Train is the type of virtual reality video game that you dreamed about playing as a kid. You play a super agent with access to an exciting array of rifles, handguns and grenades at your disposal. Bullet Train starts you off in a speeding subway and races you through a fun tutorial and into eye-popping immersive action! What’s really cool about Bullet Train is the sensation of bullet time where you’re able to grab bullets out of thin air and redirect them towards your armed enemies. The feeling of snatching a bullet is very intuitive and worth every bit the enjoyment of seeing your enemies decimated in rapid fashion. Even though, Bullet Train is a short-lived demo, the thrills you will get from playing are insanely fun and memorable. Graphics are super crisp and reminds me a little bit of Time Crisis with a shot of VR.

Bullet Train is a front-facing action shooter developed and published by Epic Games. It has an age rating of 13+ and can be downloaded here.

Robo Recall takes you back to the days of nostalgia with its retro fonts and soundtrack. You inhabit a futuristic world where all robots, through some design flaw, have all gone murderous and rogue and it’s your job as a Robot Recall specialist to eliminate them. After tinkering around in your workshop, you are thrown in urban levels and tasked with facing down legions of robots with your trusty dual pistols and heavy-duty shotgun. The gameplay is just fantastic, with traveling done through teleporting. Reloading is done by grabbing your guns from your holsters and you can even upgrade to a shotgun by reaching behind your back. The graphics are phenomenal and I’d have to say Oculus Rift’s superior visual quality really makes a difference in this frenetic sci-fi shooter.

Robo Recall is an arcade first-person shooter developed and published by Epic Games. Robo Recall is rated T for Teen. Stop the robot uprising and download it here.

Quill is Oculus’ obvious reaction to HTC Vive’s mind-bending, art sandbox game, Tilt Brush. But where Tilt Brush is free-flowing and rudimentary, Oculus’ Quill is professional and a bit complicated. Quill gives you an interface that is a lot like Photoshop in that there’s options for layers, importing sketches and other master effects. But the real attraction of Quill is its exceptional sense of scaling. Included in Quill are custom paintings done by real artists. These works of art can be rapidly multiplied in scale by spreading your hands apart or closing them. For example, there is a painting of a room but as soon as you scale out, you’re facing a new macrocosm of space from outside of the painting itself. It’s VR games like Quill and Tilt Brush that are going to change the entire way we think about when we think about applications and perception. There’s a bit of a learning curve, but it’s also easy enough that you can plug in your headset and get straight to dabbling.

Quill is a virtual reality illustration tool. It is recommended to anyone Age 13 and older. It was developed and published by Oculus Story Studio. Start drawing and painting your creations by downloading the game here.

Dead and Buried is one of the free games that comes with the Oculus Touch. It’s a smart move considering the amount of funds a player needs to invest to even start playing. Dead and Buried is a shooter set in the Old West and features many game modes like shoot-out, horde, multiplayer and other modes. The biggest appeal behind Dead and Buried is obviously multiplayer mode where you can play cooperatively with your friends, or face them in a duel. The art style is very good and reminiscent of Bioshock Infinity, while the gameplay is very responsive and nerve-wracking good fun. The only problem is that I found it a little boring always being hunched behind a crate and popping off shots across the street. You can duck and hide in Dead and Buried, but you cannot move to another location. This is issue of mobility is something virtual shooters need to address. But since it’s free with your Oculus Touch controllers, it’s definitely worth a shot!

Dead and Buried is a Western first-person shooter. It was developed and published by Oculus. It has an ESRB rating of E for everyone. Download it from the Oculus Store here.

Toybox is an excellent game for demoing your brand new Oculus Touch controllers. Made in the same vein as HTC VIVE’s Nvidia Mini Games, Toybox puts you in a sandbox area with a colleciton of interactive items at your disposal. There’s a laser gun, toy trucks, firecrackers, frisbees and other assorted “toys.” What’s really interesting about this game that you can pick up each object and make it interact with other objects. You can use a lighter to set the firecracker off as you watch it explode next to a mountain of toy trucks you’ve created. Toybox isn’t so much a game as it is an overall experience to marvel at the slick capabilities of your Oculus Touch controllers. Controls are very responsive as you’ll surprise yourself with how many dynamic actions you can do in VR space.

Toybox is a casual VR experience and was developed by Cloudgine and published by Oculus Studios. It is rated E for everyone. Download it here.

The Oculus has proven itself with the addition of the Oculus Touch Controllers and made this virtual game session much more immersive and enjoyable.